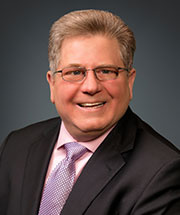 Doug Warlick has been a self-employed family law attorney since 1981. He began his career in Cook County where he represented parents and children in the Cook County Juvenile Courts for more than 10 years. In 1989, Doug moved to DuPage County where he practiced for the next 10 years. He was active in the DuPage County Bar Association (DCBA) as a volunteer for the annual Judge's Nite legal aid fundraiser and chair of the matrimonial law committee and the children's advocacy committee.

In 1999, Doug moved his residence and office to Geneva in Kane County, Illinois. He continued his service to the legal profession as a director of the KCBA, photographer, and thespian for many bar shows. In addition to providing pro bono services, Doug donates to the charitable arms of the DCBA, KCBA, and the Illinois State Bar Association (ISBA). He has been active in the Illinois State Bar Association for countless years, serving on several Section Councils and as an elected member of the Assembly.

The KCBA award for years of humanitarian services went far beyond his professional generosity to the legal community as Doug was a renowned past President of the Geneva Lions Club and current President of the Geneva Lions "We-Serve" Foundation (serving in his second three-year term). Doug also enjoys an impeccable reputation in the community through services to the Geneva Chamber of Commerce and as attorney for his church. Furthermore, putting his passion into practice, after being elected a precinct committeeman, Doug serves as Vice-Chair of the Geneva organization.

About Douglas B. Warlick & Associates

The law firm of Douglas B. Warlick & Assoc. focuses exclusively in the area of Illinois family law, emphasizing a commitment to personal attention and resolution of their clients' legal interests through litigation, mediation or collaborative law. In 2011, Doug purchased the "Hansen Baking Company" building with the iconic mural. After converting the building into its present prestigious law office, he hired his first associate attorney. With decades of experience, Doug is not only an exceptional litigator but also a negotiator with incredible insight and skills that define him as a master strategist. There is no family law matter too complex or difficult for Doug to handle.

Based in Geneva, Ill., they represent clients throughout Kane County as well as Kendall, DeKalb, DuPage and Will Counties.