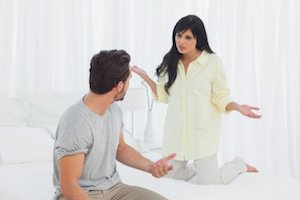 As soon as Gov. Maggie Hassan signs the anti-adultery bill, which was recently passed by the legislature, it will no longer be a criminal act to commit adultery in the state of New Hampshire. Currently, adultery is a Class B misdemeanor and punishable by a fine of up to $1,200.

Adultery is still considered a crime in 21 states, including Illinois. The Illinois Criminal Code 720 ILCS 5/11-35 says adultery is a Class A misdemeanor and is punishable by a prison sentence of up to a year. Not only can the married person committing adultery be charged, but the person with whom they are committing adultery with – even if that person is not married – can also be charged.

Michigan and Wisconsin’s adultery laws are even harsher. If you are charged with adultery in either of those states, it is a felony. And in Massachusetts, if you are found guilty of adultery, you could receive up to three years in prison.

Even if a person is not charged criminally, committing adultery can have other serious consequences. Having an affair can be grounds for dismissal of a job. This is happens frequently in the military. In the past eight years, at least 30 percent of officers have been fired for sexual misconduct, including committing adultery.

And while the act of committing adultery poses  little threat of being prosecuted, it could still result in civil consequences. Melissa Murray, a law professor at the University of California-Berkeley, notes that adultery could indeed impact custody battles during a divorce and affect the decision a court makes in a custody battle or property settlement. Murray noted to USA TODAY Network that there is a stigma connected to adultery because it is considered a crime.

If your spouse has been committing adultery and you are considering divorce, contact an experienced Geneva family law attorney today to find out what may be your best course of action.