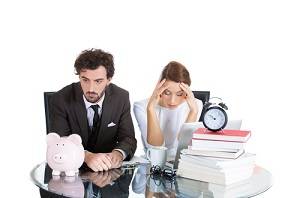 Dividing assets during a divorce is a well-understood part of the process for most people. However, what many do not realize is that there are certain debts that must also be divided between the spouses. It would be inequitable for some debts to be shunted onto one spouse when the proceeds of that debt were used by both spouses.

Before marriage, two people have their individual property that they own. Once they get married, however, any property accumulated (with rare exceptions) is referred to as “marital” property—that is, owned by the couple. Thus, if a divorce occurs, these assets must be distributed fairly between the two spouses.

The general rule is that marital property is divided equitably—fairly, not necessarily equally—between the spouses. Most people understand this to mean the couple’s assets. According to Illinois law, however, marital property includes both assets and debts acquired during the marriage. This holds true even if the debt was incurred by only one of the parties. It is still property of the marriage if it was incurred during the marriage. At least in Illinois, that is the only criteria necessary to classify a debt as marital.

There are, however, exceptions to this rule. Some debts are considered dissipation on the part of one spouse, which means that spouse spent money solely to benefit themselves after the marriage had broken down but prior to divorce. The person who incurred those debts will be exclusively responsible for them.

On rare occasions, a spouse may be assigned a debt that he or she did not incur. Illinois is an “equitable distribution” state, meaning that generally, the spouse who receives more assets or makes more in salary might be assigned more of the marital debt simply because of a better ability to pay. Rightly or wrongly, this arrangement sometimes means that a spouse will refuse—or be unable—to pay a debt incurred either by the couple or by his or her ex-spouse. If this happens to you, you have one major ally on your side if you are the spouse being hounded for money: the family court.

Assume, for example, that your spouse is given the mortgage payment as part of his share of the marital property. If he is unable to pay, the bank may come after you, given that the mortgage is in both of your names. You can petition the court to enforce the divorce decree. Then, your spouse must either pay or provide a compelling reason why he cannot. Unfortunately, however, by the time this occurs, your credit may already be negatively affected.

Be advised that sometimes credit issues for you or your ex-spouse may lead to bankruptcy down the road. If your spouse files for bankruptcy, it may affect you and vice versa because some debts you both owed will then be your sole responsibility. A creditor cannot legally collect from a bankrupt debtor, but they may try to collect from the non-bankrupt debtor, even if the debt was assigned to your ex-spouse in the divorce.

Put a Knowledgeable Professional on Your Side

If you and your spouse’s assets and debts are hopelessly entangled, a competent asset distribution attorney may be your salvation. Contact The Law Offices of Douglas B. Warlick & Associates to speak with one of our Geneva divorce lawyers today. We will help you explore your options for dividing marital debt and assist you in making the best decisions for your future.