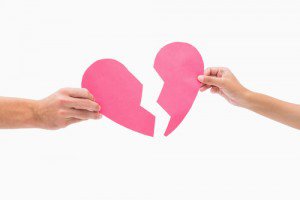 Unsurprisingly, many who experience divorce commonly describe the experience as heartbreaking. A new study, though, suggests that such a word choice may not be entirely inappropriate.

The metaphor of a broken heart is practically as old as language itself. It has survived the centuries as an accurate representation of the intense emotional pain associated with significant loss, including the death of a loved one or romantic rejection. The pain of psychological or emotional heartbreak can be so real, in fact, that physical manifestations are common, including chest pains and arrhythmia, and are frequently mistaken for heart attacks.

While such symptoms and feelings may be experienced at the height of an emotionally charged situation, long-term heart health may be affected as well. A study conducted by researchers at Duke University seems to have identified a link between divorce and future heart attacks in women.

Led by sociologist Matthew Dupre, the research team looked at more than 15,000 people between the ages of 45 and 65 over an 18 year period. Over that time, more than 1,150 of the participants suffered a heart attack. The team then analyzed the marriage and divorce history of the heart attack victims, finding that women who had divorced, even once, were 24 percent more likely to suffer a heart attack than women who stayed married. A second divorce increased the likelihood of a heart attack by up 77 percent. Divorced men, however, only began to show an increased heart attack risk starting with a second divorce.

While the study did not necessarily look at the reasons behind the increased heart attack rates, it certainly supported the findings of other projects which have linked stress levels and heart health. Life changes, including divorce, can destabilize an individual’s situation to such a degree that elevated stress levels and associated hormones are unavoidable. “The health consequences of social stresses are real,” Dupre said. His team also pointed out that other studies have established a connection between marriage and healthier living habits, which may explain a decrease in cardiovascular health in some women after divorce.

Of course, the findings of such a study should never lead an individual to stay in a destructive or unhappy marriage based on the fear of a heart attack. Instead, it is important for recognize the impact that any life changes can have on one’s health and to address them, when necessary, with a medical professional.

If you are considering a divorce, discussing the potential health impacts with your doctor is a wise decision. In addition, discussing the legal details with a qualified lawyer can also reduce your stress and simplify the process. Contact an experienced Geneva divorce attorney today to learn how we can help. Our dedicated team is prepared to offer you the professional representation you deserve during a challenging time, helping you create a healthier future.