Can the Gender of Your Children Forecast Marital Bliss or Divorce? 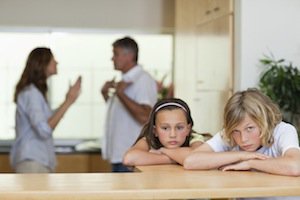 The battle of the sexes is at it again. According to an article published by ABC News, the gender of your children may determine the marital future of their parents.

Of course, as parents, we are primarily concerned with the health and happiness of all our children, but recent data from the U.S. Census shows that couples who raise girls may find it more hazardous to a marriage, as well as to the decision to remarry after the dissolution of a first marriage. Data further suggests that raising boys, on the other hand, tends to hold the family together. Often mothers of boys choose to remarry following divorce. The data further concludes this is not so common for mothers of daughters.

According to an original research report from economists Gordon Dahl (University of California, San Diego) and Enrico Moretti (University of California, Berkeley), data supports that first time parents welcoming a daughter into their family were about five percent more likely to seek the services of an experienced divorce attorney. When there was the birth of up to three daughters, the percentage increased to 10 percent, in favor of dissolution of a first marriage. The study was driven by more than three million adults completing the U.S. Census.

Could mothers of boys find it difficult to face life as a single mom or are mothers of girls  more open to leaving a bad marriage to illustrate a sense of determination and self-worth for their daughters? Perhaps further insight into the research can set the record straight on who is winning this statistical battle of the sexes.

Traditionally data supports the “pro-boy” view point. It appears that boys often increase the quality of marriage by making divorce seem less attractive for either spouse. Dahl and Moretti rely on statistical data that supports the “pro-boy” theory and conclude that boys will hold their fathers accountable to the commitment of family and marriage.

Dahl and Moretti also conclude that fathers of girls are less likely, by three percent, to be living in the family home. Daughters younger than 12 years of age will not experience the same home/marital environment as their male counterparts. Data supports that fathers tend to think they have more bonding opportunities over shared interests with their sons than they may have with daughters.

Research suggests that daughters provide a sense of empowerment to their mothers when it comes to filing for divorce. Truly, mothers want to project a sense of personal well-being to their daughters and are more quickly to opt out of a crumbling marriage.

Dahl and Moretti also believe that more often than not, daughters will contribute to the load of household duties, thus making it easier for the mother to opt for divorce. A mother knows she can count on her daughter as a emotional support system as well as around the house. Daughters may also be instrumental in breaking the chain of generational abuse and offer a stronger bond between mother and daughter as they became their own “family."

Couples experiencing a birth out of wedlock or seeking the results of a sonogram statistically were more inclined to marry if the child born was a male. This data further solidifies Dahl and Moretti’s data that sons promote a stronger commitment to marriage and family than female offspring.

Statistically, research does provide for a complexity of percentages as to how offspring may impact personal and family life, but of course additional questions are waiting to be answered. The questions include:

The data derived from the Census Bureau and Dahl and Moretti’s study does not offer a definitive answer as to why marriages succeed or fail with regard to their biological offspring. The data just leaves the door open to the further exploration for a definitive answer.

If you are a mother of daughters or sons and find yourself wanting to dissolve your marriage for any reason, the Law Office of Douglas B. Warlick can help. Attorney Warlick can meet with your personally to ensure you are not left searching for answers.

For over 30 years, attorney Warlick has been counseling and serving as a legal advocate for residents in  Kane, Kendall, DeKalb and DuPage counties. Research may provide a numerical backdrop for many of our societal issues, but facing a divorce in real time brings surely raises questions. Contact an experienced Geneva family law attorney at 630-232-9700 for your initial consultation. We can provide you with the answers to all of your family law needs.