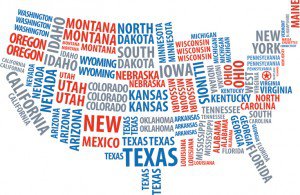 Marriage and divorce are, obviously, very complicated and personal matters. They are impacted by countless factors and contributions not only from each partner, but from children, extended families, and, to an extent, the environment in which they exist. While relationships, obviously, are affected little by arbitrary lines on a map, analyzing marriage and divorce across the United States shows some very interesting results.

Based on information collected in the American Community Survey, an ongoing social data project run by the U.S. Census Bureau, researchers have determined that residents of some states are more likely to be divorced than residents of others. According to the survey, approximately 48 percent of all Americans over age 15 are married, and about 11 percent are divorced. On a state-by-state basis, however, the numbers varied quite a bit.

The survey found that New York and New Jersey tied for the lowest percentage of divorced residents, with just 8.7 percent of their population. This may not be so surprising in light of the finding that New Yorkers are the least likely to marry in the first place. Similarly New Jersey boasts a very high median income and a large concentration of marital and family therapists in the state, which may reduce the likelihood of divorce.

The state of Illinois ranked 8th lowest, reporting that 9.7 percent of its population is divorced. Illinois adults are also more likely to never have been married than most other states’ residents.

On the other end of the spectrum, the research found a number of states whose divorced population is significantly higher. The highest percentage of divorced residents can be found in the state of Maine, where 14.6 percent of the population is divorced. With a relatively high propensity for marriage, a low median income, and a very low percentage of households with children, it is understandable why Maine’s percentage may be on the high end.

In analyzing the data from the survey, researchers found that several factors contribute to higher or lower percentages of divorced residents. Income seems to play a major role as the ten states with the highest divorce rates all have median incomes below the national average, while nine of the ten lowest states have incomes above the national average. Similarly, the presence of children tends to lower the divorce percentage. Finally, the marriage rate within the state directly impacts the divorce rate, as states with more people getting married also have more getting divorced.

While these facts and figures may provide an interesting perspective on marriage and divorce across the country, they have little bearing on your individual situation. If you a considering divorce, you should speak with a lawyer who understands that every case is unique and deserves personal attention. Contact an experienced Geneva divorce attorney today. We will work with you to help you understand your options and protect your rights.