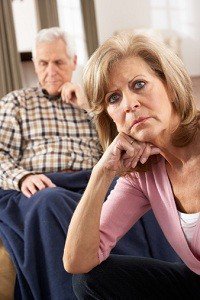 “Things just aren’t they way they used to be.” Nearly everyone has something similar from a grandparent or older relative. In many families, such maxims are often used in response to a younger generation’s morals, work ethic, or approach to a particular situation. When it comes to divorce, however, today’s young people may be justified in saying the same thing to older generations, as the divorce rate for those over 50 is at its highest point ever. Social trends notwithstanding, older divorce can present considerable issues for the parties involved, in many ways making such a divorce more complicated than that of a younger couple.

Divorce happens at any age for many similar reasons. A couple may grow apart, succumb to financial pressures, or look for increased independence. Regardless of the reasons, older divorce often leaves both partners with less ability to recover from a poorly planned divorce, as income potential and expected earnings may be significantly decreased by the parties’ age or health. Consulting with legal and financial professionals is especially critical in an older divorce as the potential cost of a mistake in the process can be financially devastating.

Division of Property, Assets, and Debt

Of course, most older divorces do not need to deal with child-related issues. However, property and debt division considerations are frequently more complicated for several reasons. First, a large number of divorces involving partners over 50 represent the dissolution of a first marriage, having lasted several decades or more. During the course of a longer marriage, the accumulation of wealth, property, and combined investments may have been quite substantial, leading to a great deal of difficulty regarding equitable distribution.

The specific types of assets involved can further complicate the process as well. For example, property tax exemptions may be available for individuals over a certain age, possibly affecting the tax liability of the spouse looking to keep the marital home after divorce. Similarly, there are specific provisions in the law regarding an ex-spouse’s Social Security benefits as well, some of them based on age, subsequent marital status, and other factors.

For many older couples, their retirement savings may have been motivated and planned with the expectation of maintaining a single household upon retiring. The establishment of two separate homes after divorce, no matter how equitably such investments are divided in the process, can place significant financial strain on both partners.

If you are over the age of 50 and are considering a divorce, it is important that you fully understand how it may affect your future. A qualified divorce lawyer can help clarify your options and will work with you to make sure your rights and best interest are protected. Contact an experienced Illinois family law attorney and get the professional representation you deserve.