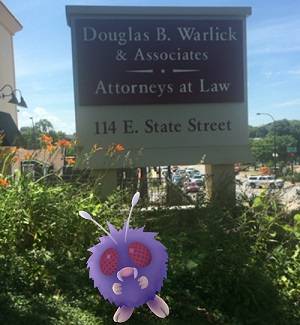 In a world where a video game stores will hold midnight release parties for the latest “first-person shooter”—think Call of Duty—or open-world, “sandbox” title—Grand Theft Auto—parents often struggle with finding ways to get their children off of the couch. Very few probably ever thought that one solution might be found in yet another type of video game.  About two weeks ago, Pokémon Go was released as a smartphone version of a franchise that has entertained children and adult around the world for nearly two decades. The release instantly sparked a wave of interest as players from all walks of life became invested in the “augmented reality” game. As you might expect, however, there have been some problems and dangers associated with Pokémon Go. If you are a parent whose children are caught up trying to “catch ‘em all,” talk to them about staying safe while having fun.

What is Augmented Reality?

Augmented reality is a video game format that utilizes a player’s real-world surroundings, incorporating them into the gameplay. Pokémon Go, for example, uses GPS and location systems to pinpoint where a player is, then overlays images and Pokémon creatures as part of the game. This means that players must move around city streets, parks, and other locations while the game presents new creatures to be caught, trained, and fought. When your children are chasing Pokémon in a park, or in someone’s yard, there is a danger of tripping and falling when watching their phone screen instead of the walkway. But in other settings, there are much more serious concerns.

Within hours of the game’s release, a police department in Australia was forced to issue a request asking players not to enter the station to complete their game objectives. The station was apparently being flooded with Pokémon Go users, preventing the department from doing its job properly. Since then, similar requests have been made around the world by public safety agencies and private businesses. There have also been numerous reports of trespassing by overzealous players.

Encourage your children to remain aware of their surroundings and to make responsible decisions when chasing a Pokémon. Stay off of private property unless the owner has given consent. Avoid unsafe parts of your area, especially at night, as a distracted Pokémon Go player could make an easy target for thieves and robbers—as has been reported in Maryland and New York.  Most importantly, never allow your children to play the game alone.

If your children are old enough to drive, make them promise to put down the phone while behind the wheel. The risks are simply too great. Similarly, if they are playing in a high-traffic area, even on foot, they must pay close attention to the cars and trucks around them. There have been numerous Pokémon-related car accidents already, many of them causing serious injury and property damage. Some have been the result of a distracted driver who was playing the game while others were caused by the inattention of players on foot, including a 15-year-old girl near Pittsburgh, Pennsylvania.

At The Law Offices of Douglas B. Warlick & Associates, we are excited to see so many young people and families enjoying a pop-culture craze together. In fact, our staff has even found Pokémon creatures hanging around our Geneva office! We highly encourage you to talk with your children about how to stay safe—not only while playing Pokémon Go, but in all aspects of life. If a legal concern regarding your children should arise, we can help. Call an experienced Kane County family law attorney to discuss your case.