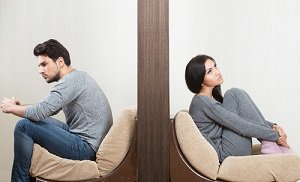 A post on this blog last week discussed one of the major changes in store for Illinois divorce laws as the result of a bill signed by Governor Bruce Rauner in late July. As previously mentioned, the removal of at-fault divorce grounds beginning in 2016 is expected to simplify the process of dissolving a marriage, as proof of such grounds will no longer be required. The same measure, as enacted by the legislature and the governor, will also impact the state’s laws regarding no-fault divorce as well. In addition to making all divorce, effectively, no-fault divorce, the new law’s effects will be felt primarily in regard to the mandatory separation period currently required for divorcing couples.

The current provisions included in the Illinois Marriage and Dissolution of Marriage Act require that, before a no-fault divorce will be granted, the spouse must “have lived separate and apart for a continuous period in excess of 2 years.” In cases where the divorcing parties can agree, the separation may be reduced to a minimum of six months. The application of this law, however, meant that a person stuck in a bad marriage, without sufficient proof of fault grounds, could be required to wait up to two years for a divorce, with no real way of moving forward until then.

Separation Can Be Waived Completely

Under the new law, set to take effect on January 1, 2016, there is no specific requirement for a separation period prior to a divorce being granted. In the event it becomes necessary, however, a separation of at least six months will be accepted by the court as “irrebuttable” evidence of irreconcilable differences. This, in effect, means that if one spouse petitions for divorce and the other spouse is opposed to the action, a six-month separation will provide the court sufficient grounds to grant the divorce anyway. If such evidence is not necessary, in other words, when the spouse agree to proceed with the divorce, they are not required to live separate and apart first.

If you live in Illinois and are considering a divorce in the near future, an experienced Geneva family law attorney can assist you in navigating the ever-changing legal landscape. Call 630-232-9700 today to schedule an appointment with a legal professional dedicated to helping you achieve the best possible outcome for your family.