Has the Romance Left Your Marriage? 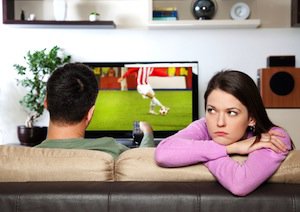 One of the biggest complaints that married couples have—and often one of the major reasons for divorce—is that too often, the romance has left the marriage. Many of the romantic interactions between the couple during their courtship and newlywed years seem to disappear over time. And now a new study has revealed that the longer a couple is together, the less likely they are to tell each other “I love you.”

The study surveyed 2,072 adults who were in committed relationships. The age of these relationships ranged from just a few months all the way to 50 years. As one would expect, couples who were in fairly new relationships (two to five years) shared “I love you” with their partner on a daily basis.

But as the relationship length increased, the frequency of the L-word decreased. By the time a couple reached the 10 year mark, only one-third of them told their partner they loved them on a daily basis. And for those couples who had reached the 50 year mark, the percentage dropped to under 20.

Ten percent of the couples surveyed, who had been together for 10 to 20 years, never or rarely told their partner they loved them at all. That number jumped to 30 percent for couple together 50 years.

Additionally, it appears it is not just the quantity of romantic exchanges that decreased between the couples, but the quality of that romantic love also appears to have diminished with time.

If the romance has left your marriage, and you feel it is beyond repair and are now contemplating divorce, a Geneva divorce attorney can help. Douglas B. Warlick has been offering personalized divorce and family law legal services to clients throughout Kane, Kendall, Dekalb, and DuPage counties since 1981. Contact Attorney Warlick at 630-232-9700 to schedule your personal consultation today.