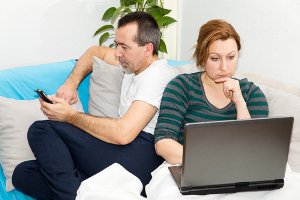 The modern world is continuing to become increasingly connected. It is nearly impossible to imagine daily life without cell phones, tablets, or computers and the accessibility of information they provide. However, there have been indications in recent years that personal relationships may be affected by increased internet use, particularly if that use centers around social media. Several studies have examined a possible link between social media use and the rate of divorce, and the findings are very interesting.

One such study was published in the July 2014 edition of Computers in Human Behavior by a team of researchers from the Pontifical Catholic University of Chile and Boston University. The team’s research “explore[d] the relationship between using social networks sites (SNS), marriage satisfaction and divorce rates using survey data of married individuals and state-level data from the United States.” The results of the study clearly suggested that as the use of Facebook and other social network sites increased in a given state, there was a correlating increase in the divorce rate during the same period.

The research team was even able to quantify the relationship. They found that a 20 percent increase in a state’s population using Facebook was linked to a 2.2 percent rise in divorce rate for that state. However, Sebastian Valenzuela, one of the study’s co-authors and assistant professor at the Pontifical Catholic University of Chile, notes, “We don’t know whether Facebook is causing divorce or if divorce is causing the use of Facebook.”

A 2011 survey conducted at the University of Texas at Austin supported Valenzuela’s conclusion of a correlation between social media and marital quality. In that survey, which gathered data from 1,000 married adults under age 40, those who used social media heavily were twice as likely to report serious thoughts of leaving their spouse compared to respondents who did not use social media. Similarly, the American Academy of Matrimonial Lawyers reports that 80 percent of divorce attorneys have witnessed an increase in cases using social media.

While certainly noteworthy, the existence of a correlation does not address the reasons why such a relationship may be developing. Divorce financial strategist and author Jeff Landers suggests that social networks put extramarital affairs within much easier reach than ever. Reconnecting with previous partners or meeting new people has taken on a new dynamic in the digital age. Landers says, “It all starts innocently enough, but the next thing you know you are meeting for coffee and the next thing you know you’re having an affair.”

Whether Facebook users are more likely to divorce or those likely to divorce happen to use Facebook, the fact remains that social media has an impact on personal relationships. If your spouse’s social network use has damaged your marriage, a qualified divorce lawyer can help. Contact an experienced family law attorney in Kane County today for a consultation.