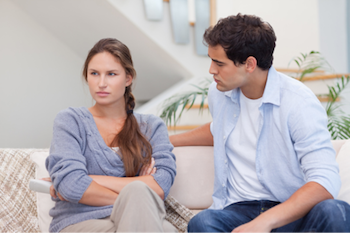 Is it possible that there’s a test that could help us better understand the connection between relationship doubts and divorce rates? According to research published in the journal Science, there’s more to relationship jitters than previously thought. Relationship doubts, especially when combined with other challenges within a relationship, can lead to separation and even divorce for couples down the road.

Scientists discovered that gut reactions experienced by people shortly after their wedding can provide a good prediction about whether the marriage would still be intact four years after saying “I do”. The study included 135 newlywed couples, all of whom reported that they were happily married. The goal of the test is to reach subconscious doubts about the relationship, since not many newlyweds would report unhappiness or concerns right away. Each individual was shown a picture of their spouse and asked to come up with a positive or negative key word associated with their spouse. Those individuals who were more positive about their relationship had no hesitations in answering the question, but those who waited a couple of seconds before responding were more likely to get divorced within the next four years.

Having relationship and marriage doubts is something that anyone can experience, but if you are feeling haunted by these feelings, you might be considering divorce. There are many reasons that you might be feeling doubts- such as suspected infidelity, different life paths, or even growing apart. As people grow and change, it’s possible that your marriage makes you unhappy and would lead you to consider divorce. While it’s not an easy decision, it might be the most appropriate course of action for you and your situation. If you would like to talk over your options with an expert, reach out to an Illinois divorce attorney today to get your questions answered.