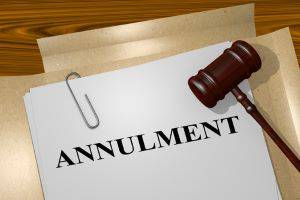 One of the most effective marketing slogans to ever hit the jackpot recently celebrated more than a decade of enticing vacationers and love struck couples to Sin City. Illinois couples, however, do not need to travel to the desert to tie the knot nor petition for an annulment. Couples can opt to petition for an annulment as stipulated under the Illinois Marriage and Dissolution of Marriage Act (750 ILCS 5). However, under the terms of the Illinois Declaration of Invalidity of Marriage, certain criteria must first be met in order to qualify.

Differing than filing for a divorce, an annulment provides the option to petition the court and request approval to wipe the marital slate clean, thus declaring a marriage as null and void. Annulments can be tricky, however, and contacting a qualified Illinois family law attorney knowledgeable of annulment law in Illinois is essential. However, before your scheduled consultation, these key elements could provide valuable insight to the process.