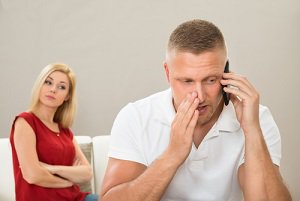 You and your spouse need to take the necessary time to fully understand the extent of situation. If he signed up, did he do it purely out of curiosity or in a moment of frustration? Did he actively pursue and consummate an affair? Were there warning signs in relationship previously? There are no “right” or “wrong” answers to these questions.  They can, however help guide your conversation toward the right decision for your future.

While it may not always be possible to read someone, you have probably been your spouse long enough to recognize the truth. A spouse who acknowledges his or her responsibility quickly and without deflecting may provide hope for your relationship. If he tries to mislead, lie, rationalize, and make excuses, it may be time to consider moving on. It is important, though, to realize the difference between rationalization and underlying reasons. A spouse who wants you to know his reasons will not usually try to avoid responsibility for his actions, while a rationalizing spouse will be attempting to escape blame.

Taking the Next Step

If you do decide to end your marriage, you should do so with the realization that, more than likely, both of you contributed to its breakdown. An extra-marital affair is often the manifestation of much deeper issues in the relationship. Although such behavior may not be acceptable, understanding it could help you prevent future relationships from taking a similar path.

No matter what may have caused your marriage to fail, divorce can be a challenging process. Contact an experienced Geneva family law attorney today for guidance through your situation. Call 630-232-9700 for a confidential review of your case. We are committed to helping you find the peace of mind and security you deserve.